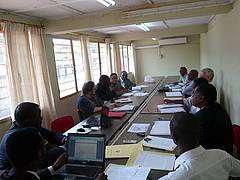 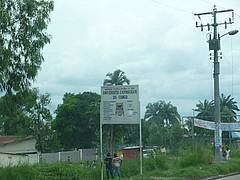 The Catholic University in Kinshasa

The Catholic University of Congo in Kinshasa offers various courses. For the Catholic Church the Theological Faculty is the most important one. The quality of the courses does not only depend on the quality of the teaching but also on infrastructure. For several years the MWI looks after the University and especially the Theological Faculty. During the latest working session the change to new study regulations and the tasks of the library were dealt.

The MWI has already reported a few times about the development of the oldest Catholic University in Africa, for the last time in February 2014 in „contexte. Nachrichten aus dem MWI“ (Contexts - News from the MWI (in German). If you want, you may ask for the Flyer here).

In June 2014, a new working session took place, where the change to the new international study structure "Bachelor – Master – Doctorate" was dealt. This should in future replace the actual French system structure. Therefore, a lot of technical details concerning the study courses and the examination regulations have to be organised. Another central theme was the change from a lecturing to a supporting and independent study style. One student does not only come to University to pile up knowledge, but he has a life project that he wants to realise with the help of the university. Working independently, feedback by lecturers, internships and group work are the main focuses in future. That means that a lot is demanded by the professors, they have to change their traditional lecturing method into an interactive one. This will not be easy. Some of the traditional African culture has to be developed in the way that young researchers can be taken for serious as important dialogue partners in discussions. The accompaniment of the students affords more effort and work than holding lectures. Because of too little remuneration, many of the doctorate's and master's professors are forced to to take up a second job, which is another challenge.

Autonomous learning also requires access to a good library. It is not only about gathering books; they also have to be accessible. Beyond long opening hours and enough space, a critical handling with the literature should be introduced. Literature is not only accessible via books but also via internet. Data folders also offer a lot of information. There, serious sources have to be distinguished from unserious ones. The library in Kinshasa does not only need actual books, but also a steady access to these sources in the internet. Both have to be massively developed, if the university does not want to be left behind. Just as important are the human resources caring for the library and helping the students to work with the literature and the sources.

The MWI will be going on supervising the development process and supporting the university. First, the MWI will start to unify the supporters of the library at one table – the Universities of Leuven and Louvain-la-Neuve are also part of it – so that the forces can be pooled and the helping actions coordinated.