12. January 2018
Editorial team convenes in Aachen to determine the theological texts of the highest significance of the worldwide Roman Catholic Church 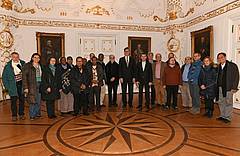 Reception at the City Hall of Aachen

The Institute of Missiology Missio and the city administration of Aachen jointly host a reception for a group of theologians from Africa, Asia, the Orient, Oceania, and Latin America.

Aachen (January 10, 2018). Currently, a dozen renowned male and female theologians from Africa, Asia, the Orient, Oceania and Latin America convene on the premises of the Institute of Missiology Missio in Aachen to elaborate a compendium with the title “Theology from a South-South-perspective”. On Tuesday evening, they were officially received at the city hall of Aachen by the mayor Marcel Philipp. The theologians exchange their ideas and jointly determine which theological texts from their home continents have been of the highest significance for the theology and the daily church life during the previous centuries. In the end, those texts are to be compiled into a multilingual compendium in order to provide teachers, students and other interested persons with a comprehensive overview of these texts.

This conference affords an opportunity for the European theology to enter into a dialogue with the theological thinking and approaches in Africa, the Orient, Asia, Oceania and Latin America and enables true mutual learning”, states Professor Dr. Harald Suermann, director of the Institute of Missiology in Aachen. Mayor Marcel Philipp sees the editorial conference as a positive indication that “Aachen is a place of significance for the Humanities with a theology of international magnetism and reputation”. According to Marcel Philipp, this is also of great importance for Aachen in order to carry on the tradition initiated by Emperor Charlemagne who laid essential foundations for the medieval education system that continue to have an impact on the fields of Philosophy and Theology to the present day.