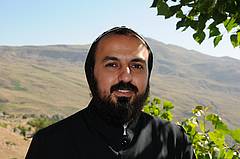 "We have heard that the city of Maalula was attacked recently. What is the significance Maalula has for Christians today?"

Maalula is a Syrian village about 50 kilometers in the north of Damascus. It is known primarily for the Aramaic language (more precisely it is a neowestaramaic dialect) spoken by its inhabitants: The population is both Christians and Sunni Muslims, too. The latter represent a third of the village population; Aramaic language is also spoken in the two neighboring villages Bakh'a and Jaba'din.

Maalula is also known for its many historic Christian sites, some of which date back to ancient times, such as the Greek Orthodox Monastery of Mar Thecla. Mar Thecla is a princess of the Seleucids. There is also an ancient Greek Catholic monastery, which is dedicated to the martyrs Sarkis ( Sergius ) and Bacchus. They are Roman saints of the East and celebrated on 7th of October.

Furthermore, there are cave dwellings in the town coming from the first decades of Christianity.

In the Middle East the village is known for its piety and its special solemnity  with which it celebrates every year on 14th of September the feast of the Exaltation of the Cross. Then, great fires are kindled on the hills and residents and visitors, that means Christians and Muslims, are invited to participate in the big dinners, which take place after the religious ceremonies.

For the Christians of Syria, Maalula is a symbol and main town of the Syrian Christianity.

"Who are the Christians who live there? How many are there today?"

The Christians living there belong to two main confessions: to Greek Orthodox and Greek Catholic. Because of the attacks of Monday, 11th of September that have taken place in the village, all the inhabitants had fled to Damascus. There remained only the sisters of the monastery Mar Thecla with the orphans they look after, and some old people who sought refuge there.

"You have friends and brothers who live there. Are you in contact with them? What do they say about the current situation?"

It is true, I have friends and confreres in Maarath Saydnaya, a village 25 km north of Damascus and about 30 km from Maalula. I am in contact with them, until now they were safe, but the rebels and the Islamists are not far away. Of course there is concern, but no fear.

The situation in Maalula is the following: the Syrian army has occupied the village. The armed gangs have retreated to the caves, which are located in the surrounding hills and from there they shoot the Syrian army. The Syrian Army is trying to find them in their hidings.

"Soon you will have finished your thesis and it was provided that you return to Maalula to teach there. What are your plans and those of your bishop, now?"

It is true, it was intended that I return to the seminar in Saint Ephrem Maarath Saydnaya to teach there. Due to the uncertain and unstable situation, the seminar developed the virtual training system, the "e-learning". So I'll bring our seminarians closer the doctrine of the New Testament via this medium of communication from Lebanon. Several courses will be taught with the help of this medium until the situation has calmed down. We do not know if this system will work as we want, because we do not know whether the Internet will continue to operate in Syria. Anyway, we will try to give our best. Especially because the Patriarch has no intention under the current conditions to move the seminar from Syria to Lebanon, for example.

Finally, I want to thank the Institute of Missiology for everything it has done for the Christians of the Near East and for what they are still doing!

The MWI is thanking you for your opinion!